IFI Techsolutions leveraged Azure Web Application Services to address our client’s requirement. The flexibility of Azure to customize the platform with Linux as an operating system allowed us to carry out few proofs of concepts which gave our client assurance that the Azure platform is something that they can grow their Web Application on, with assurance in performance & security. We gave our client a walkthrough of how azure can seamlessly adopt different frameworks & development stacks irrespective of the original build operating system platform. We have showcased this by migrating the on-premises Windows platform to Azure WebApp services hosted on the Linux platform. We also made use of the repositories which helped in performance enhancement, the combination of all this is what showcased the flexibility that Azure as a Cloud Platform brings to their business.
Our solution thereby helped the client in adopting Azure as a cloud platform where scalability & performance would be a value for their investment.

L&T Defence had an internal web application that was built using Django as a web framework and python as a programming language. This web application would use its customized API’s which would reach out to all external & internal website which had all defence-related updates published. This was built internally using python and keeping in mind on-premises as an infrastructure. Managing a considerable infrastructure for a Web Application that was more process & service-oriented was leading to investment in infrastructure & other relevant resources.
Our solution accommodated & addressed concerns regarding Scalability, Security, Compute Performance, Integration with Other Services, Network Throughput, etc.

We migrated from On-Premises to Azure WebApp Services with continuous addition of relevant packages which would enhance the performance of the Web Application on the cloud, this means that we bought down the API response time from 45 seconds to 20 seconds. There were challenges with the performance which we dealt with seamlessly and also ensured that the GUI or the front end of the Web Application was not compromised. This gave the need for the application owners to further explore other Azure Platform-based services which could be of value add to the Defense hence increasing the usage and demand of other services. We have used various compatible Linux packages to customize & fine-tune WebApp services to optimize the performance of the application. There were packages like Whitenoise which we leveraged to ensure that we can run static files on Azure Platform and used our expertise to integrate storage for temp processing of API data. We have in addition leveraged WAF to ensure that we secure the web application & its API processes.

Our Migrated Application underwent a series of testing which also included “Grey Box Testing” to ensure that performance is not compromised after the migration process. This is all possible with extensive product & platform knowledge which can be vouched upon. With the use of technologies that Microsoft Platform has to provide as a Cloud Provider, we have endeavoured into building up a robust, scalable & secured solution which has been one of the first in the world to be adopted by the defence.

With this solution, we can leverage & seamlessly transit your web application between different operating system platforms with correct methodology, hence keeping the framework and code intact. We have also discovered that such an approach gives room to integrate all other services to make the best use of technology for any industry which has the urge to grow. 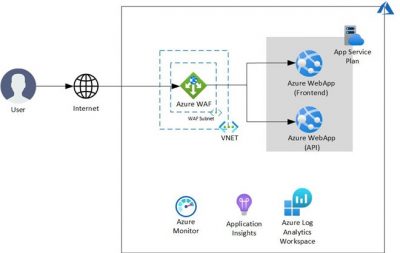